Erica and her family fell in love with Tito, a friendly kitty with a big personality, after fostering and then adopting him from City Dogs & City Kitties Rescue (CDCK) in 2016. This adorable guy captured their hearts when he took to delivering them cat toys daily, asking for playtime and snuggles. 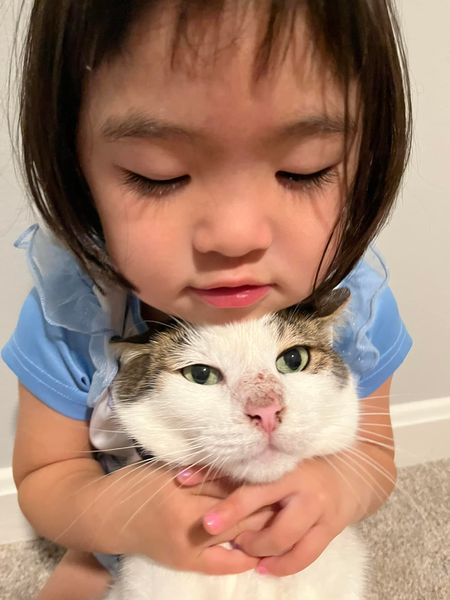 Beloved Tito snuggles up with his human “sister”.
One evening Tito didn’t come for his dinner, a meal he never skips, and the family knew Tito was missing! Erica reached out to CDCK for help and connected with Carlyn, an amazing volunteer with experience reuniting missing pets with their families. Carlyn helped Erica’s family put up posters in their neighborhood, advised them about helpful social media channels such as Nextdoor, Facebook groups in the northern Virginia area, PawBoost, and Ring’s Neighbors App, and she helped them install a camera and a trap.

Unfortunately, instead of showing Tito, the camera picked up images of another cat. While indoor cats usually “hide in silence” near their home, Carlyn worried that the other cat may cause Tito to go further away.

With days passing, it was time to hire a professional pet tracking service. Professional Pet Trackers, which has successfully helped connect other CDCK pets with their families, was called in. Carmen Brothers and her three dogs picked up Tito’s scent, leading them to a shed close by, where a camera was immediately set up. The next day Tito was spotted on the camera! A trap was quickly installed, with a trail of food leading into it, and voila! Tito took the bait and went into the trap.
​
Erica and her family were delighted to have Tito back home, and we’re pretty sure Tito was just as happy to be back in their loving arms! Despite having survived on his own for two weeks, he was in relatively good shape. His nose was a little bit swollen, and he was prescribed antibiotics by his veterinarian. After a bath and the love and care of his family, Tito was back to his usual self within a couple of days.

Erica says that “God is in Heaven, and Carlyn is on Earth”. Carlyn worked tirelessly, entirely on a volunteer basis. When reflecting on the experience of losing Tito, Erica has trouble finding the words to express just how grateful she and her family are for Carlyn’s help, and for the help and emotional support of the entire CDCK community during such a difficult time.

Only Tito will ever know how he got outside and what he did for the two weeks he was away from home on his “unauthorized adventure”!  What we do know is that Tito is now safely back at home thanks to the extraordinary efforts of City Dogs & City Kitties Rescue volunteer Carlyn, and the numerous friends and other members of the CDCK community who helped spread the word.


Volunteer Carlyn offers the following advice should anyone find themselves with a missing pet:

Erica shares a few lessons learned, for anyone who may ever go through a similar experience: